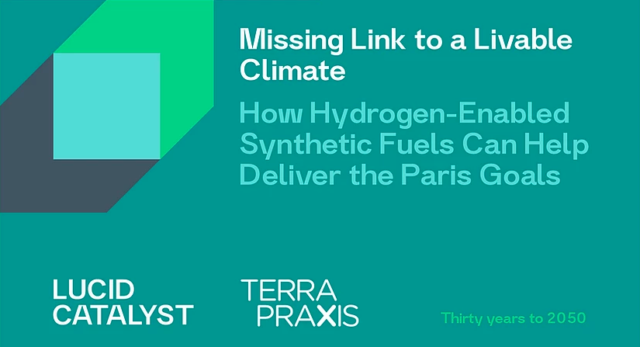 As outlined in the report, the world’s toughest decarbonisation challenge is how to replace the fossil fuels used in sectors such as shipping, aviation, heavy industry, cement and in domestic heating. Industries such as aviation and maritime shipping, for example, simply can’t be electrified.

Well the good news is that hydrogen – a totally clean liquid fuel – can do a very good job of replacing much of the fossil fuels in these areas. Hydrogen can either be used on its own if you build specialised pipelines and infrastructure, or even better, through combination with other molecules to make ‘synthetic fuels’ such as the rather smelly, but very powerful ammonia. This allows it to be mixed in with the existing gas grid.

Hydrogen however isn’t a fuel that we can go and dig up somewhere like a fossil fuel. We have to create it ourselves using another kind of power – generally electricity. This means its better to think of hydrogen as a carrier of energy, rather than a primary source of it.

Heres the rub though for the 100% renewables crew. For hydrogen (or synthetic fuels made with hydrogen) to actually replace fossil fuels on any scale the price has got to be competitive. To be blunt about it, we need to find a way of making hydrogen fuels cheaper than – or about as cheap as – sticking with dirty oil and gas. And as the report expertly analyses and demonstrates… there’s just no way to do that using renewables in any realistic time frame or without covering impossibly large areas of the planet in solar panels or wind farms. You’d need an area the size of Brazil in wind turbines to replace the world’s oil usage alone with hydrogen! The only way to make huge amounts of cost competitive hydrogen? You guessed it – nuclear power.

The reasons are fascinating but also rather multifaceted and complex. In essence though it all ultimately comes back to the incredibly high power density of nuclear power. Thanks to this massive power density nuclear reactors can create both massive amounts of electricity and massive amounts of heat at the same time, all on next to no land. Combining this electricity and heat means you can use a high temperature type of electrolysis to make your hydrogen efficiently, and thus cost competitively with fossil fuels.