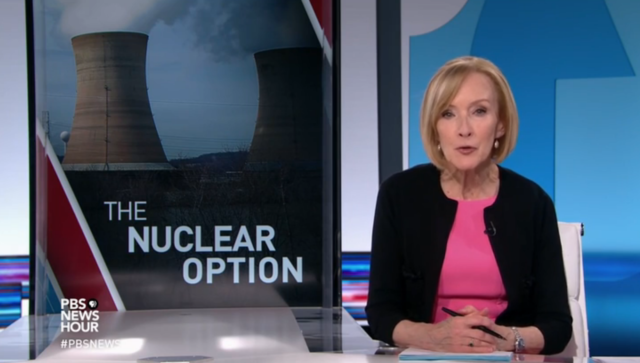 To kickstart the new year, PBS aired a nice 10 minute segment on advanced nuclear energy including interviews with Idaho National Lab director Mark Peters and inspirational Transatomic CEO Leslie Dewan, alongside some skepticism from Union of Concerned Scientists. You can watch the video by clicking the image below.

A longer documentary will be broadcast on PBS Nova on Jan. 11: The Nuclear Option: How will we power the planet without wrecking the climate? [We think that’s a great question!]

Why some engineers and investors are making big bets to develop a new generation of nuclear reactors.

The next generation of nuclear power is coming, as concerns about climate change bring the industry out of hibernation. Science correspondent Miles O’Brien reports on how new startups and young scientists are hoping to develop solutions for safely generating vast amounts of nuclear energy.

Click here, or the image below to watch the 10 minute video:

JUDY WOODRUFF: Now: why some engineers and investors are making big bets to develop a new generation of nuclear reactors.

Miles O’Brien has the story. It was a co-production with our friends at PBS “NOVA” tied to the January 11 documentary “The Nuclear Option.”

His story is part of our weekly series the Leading Edge.

MILES O’BRIEN: This is where nuclear power began. Welcome to the Idaho National Laboratory. It covers a vast swathe of high desert nearly the size of Rhode Island.

It is dotted with experimental nuclear reactors that wrote the textbooks on how to generate power by splitting atoms. And now a new chapter is being written here.

MARK PETERS, Idaho National Laboratory: If we’re going to mitigate climate change, we have to think about how to develop new nuclear.

MARK PETERS: We’re restarting and testing infrastructure to start to develop the next generation of nuclear power. So I’m just incredibly excited about the fact that we’re finally starting to get a public dialogue going now that it’s important to build the next generation.

MILES O’BRIEN: The Bush and Obama administrations and Congress have concurred on that point. Together, they authorized tens of billions in loan guarantees for nuclear plant construction, and tens of millions in funding to develop what’s known as Generation IV technology.

MILES O’BRIEN: And perhaps his most promising client is an innovator from another industry. Microsoft founder Bill Gates is among a handful of entrepreneurs with seemingly bottomless pockets making big bets on nuclear power.

In a 2010 TED Talk, he announced he had co-founded a company called TerraPower. His partner is his former chief technology officer at Microsoft, Nathan Myhrvold.

MILES O’BRIEN: TerraPower’s reactor uses a design that dates back to the first ever nuclear power plant, built here in Idaho. It illuminated its first lightbulbs in 1951.

It’s an entirely different design than the vast majority of nuclear reactors currently operating. The fuel wasn’t cooled with water, but, rather, liquid metal, sodium mixed with potassium, which has a lower melting point, absorbs more heat, and has a much higher boiling point than water. It had some inherent safety advantages over water-cooled reactors, which cannot safely shut down without electricity from the grid to keep cooling pumps running.

This is what happened at Fukushima in 2011. An earthquake and tsunami caused a station blackout that also destroyed backup generators and batteries. The reactors overheated and three melted down.

MILES O’BRIEN: Twenty-five years earlier in Idaho, engineers staged a prescient demonstration of the Fukushima scenario in a sodium reactor. They deliberately shut off the coolant flow. In a water-cooled reactor, like Fukushima, this would have caused an explosion, but this reactor safely shut itself down.

MILES O’BRIEN: Sodium reactors do not need the equivalent of premium gas, refined or enriched uranium. In fact, TerraPower says it can run its reactors on the leftovers from enrichment, depleted uranium.

The biggest stockpile in the U.S. is here in Paducah, Kentucky, at a uranium enrichment plant.

NATHAN MYHRVOLD: With our reactors, Paducah, Kentucky becomes the energy capital of the United States, because Paducah alone has enough of this low-level nuclear waste, the depleted uranium, that we could run all of America’s electricity needs for 750 years.

MAN: This is a model of the Navy’s first nuclear-powered submarine, the Nautilus.

MILES O’BRIEN: The seeds of the decline for liquid metal reactors were planted by Admiral Hyman Rickover, the father of the nuclear Navy.

MAN: This is the reactor or the atomic pile. There is uranium in here.

MILES O’BRIEN: He selected nuclear reactors cooled with water to propel the Nautilus, the first nuclear-powered submarine. For utilities, adapting the nuclear Navy technology for use on land offered the fastest path to market.

Water-cooled nuclear reactors quickly became the norm all over the world.

EDWIN LYMAN, Union of Concerned Scientists: I think that there was a victory on the merits here, and the other reactor designs did have the opportunity to prove themselves, and they fell short.

MILES O’BRIEN: Physicist Edwin Lyman is with the Union of Concerned Scientists. He says the promise of this new generation of nukes should be tempered by the uncertainties.

EDWIN LYMAN: Some non-water-cooled systems have a lower risk of certain types of accident, but they have greater risks of other kinds of accidents, or they introduce other security or safety issues, so there’s really no free lunch here.

These atomic business plans have lured more than a billion dollars in investment.

How much do you have to worry about free fluorine?

MILES O’BRIEN: Leslie Dewan is one of the young entrepreneurs leading this revolution. She became enamored with some nuclear technology first developed 50 years ago at the Oak Ridge National Laboratory. It’s called a molten salt reactor, not table salt, liquid fluoride salts.

MILES O’BRIEN: Having uranium dissolved in liquid offers some safety advantages. If the fuel gets too hot, the liquid expands, and the uranium atoms become too dispersed to maintain a nuclear chain reaction. It shuts itself down.

And in the case of a station blackout, like Fukushima, the liquid fuel drains into a larger tank, where it cools down passively, no electricity needed. At Oak Ridge, they successfully ran and tested a molten salt reactor for four years, and it worked.

But building a reactor that can withstand something as corrosive as a very hot bath of salt is a huge engineering challenge. At Oak Ridge, the funding ended before they could work on that. So, the corrosion problem is the focus of early testing for Leslie Dewan’s startup company, Transatomic.

LESLIE DEWAN: We can make something that works for five years, that works for 10 years. Like, that, we certainly know. What we are trying to figure out now is whether we can use newer materials or new methods of corrosion control to extend the lifetime of the facility, because, ultimately, we care about making this low-cost.

MILES O’BRIEN: Without a tax, or a cap, on carbon emissions, matching the cost of fossil fuels will likely be an impossible order for these new nuclear designs.

EDWIN LYMAN: We don’t put a lot of stock in seeing an alternative to a water-cooled reactor being developed anytime soon, certainly not quickly enough to make a dent in the greenhouse gas problem.

MILES O’BRIEN: But, in Idaho, they are pressing forward with urgency. In the U.S., there are currently about 100 nuclear reactors in operation. The majority of them are slated for retirement in the 2030s. What will replace them? Wind and solar? Not without a breakthrough in battery technology to store power on the grid.

NATHAN MYHRVOLD: The fate of the whole planet depends on us renewing our energy system with renewables and with nuclear. And if we step back from that, we are going to create a tremendous problem for future generations.

MILES O’BRIEN: Worries about waste, weapons proliferation and safety nearly derailed nuclear energy in the past. But the quest to meet rising demand for energy, without wrecking the planet, has put new nuclear technology back on the agenda.

Miles O’Brien, the “PBS NewsHour,” at the Idaho National Laboratory.