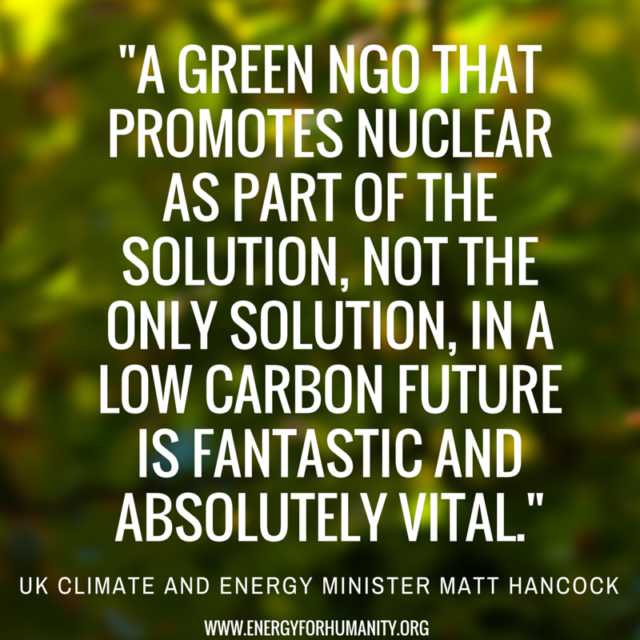 “Firstly, having a green NGO that promotes nuclear as part of the solution, not the only solution, in a low carbon future is FANTASTIC and absolutely vital.”

“One of the things I really don’t understand about parts of the green movement is that you think you want to save the future of our globe for our children and our children’s children, from the threat of climate change, yet you don’t want to use one particular technology, which has a very solid safety record when regulated properly.”

“Secondly, in the UK we are very proud of our regulatory structures, and we have new nuclear, but what I didn’t mention [in my speech] was next generation. We have research work going on SMR’s [small modular reactors] and other forms of next generation. Hopefully we will get to the point where we are world leaders in the IP [Intellectual Property], as well as being able to build and run nuclear power stations. It is a personal regret to me that that IP moved off these shores in terms of ownership and that the research base was run down over a period of time. It’s high time that that was turned around.”

This is especially welcome given the Annual Report published by the Nuclear Independent Research Advisory Board (NIRAB) today:

NIRAB concludes there is a clear gap in the UK’s R&D activity into next generation nuclear reactor technologies, including SMRs and Generation IV reactors, and their associated fuel cycles. This is an area of increasing activity in leading nuclear nations worldwide and in which the UK should play a key role if the vision for the sector is to be met.

There is an urgent need to take action to address a looming crisis in relation to the continued availability of the high level skills which are required by both industry and the regulator.  This skills issue has arisen, in part, as a result of a 20 year gap in funding in the UK for nuclear R&D into future nuclear energy technologies.   The age profile of the high level R&D skill base is unsustainable, with the majority of experts rapidly approaching or already past the age of retirement.

NIRAB recommends that Government should commission a programme of research and innovation aimed at not only addressing the urgent skills issue and developing the next generation of experts, but also positioning UK industry to gain a significant stake in a global future nuclear reactor market delivering huge benefits to the UK economy over many decades.

Thank you to the hosts of the event, marking the launch of New Nuclear Watch EU, who were kind enough to film and share this video clip.