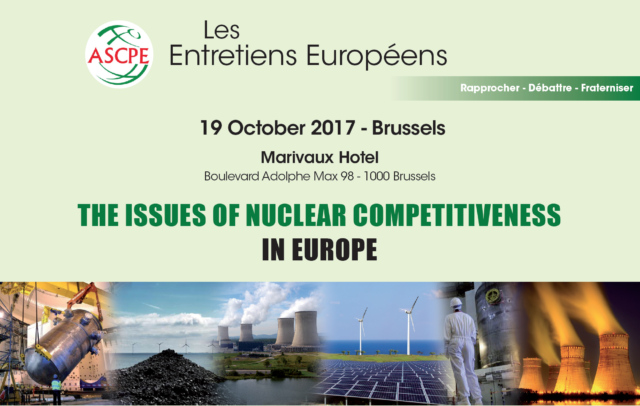 Energy for Humanity Director, Kirsty Gogan is honoured to have been invited to speak at this event on nuclear competitiveness, where she tackled questions such as: How can we relaunch investment and innovation in nuclear? What are the ethical, economic, social and scientific challenges for nuclear to be a sustainable and competitive power source?

On Productivity, Cost and Innovation

We have seen a dramatic decline in labour productivity across nearly all advanced economies from 2005-15, compared with the decade before.

Productivity is lowest in the construction sector.

Of all the advanced countries, Britain has fallen furthest, and hardest.

Post-Brexit, Theresa May’s new government appears to be paying attention to the forces at work here, with a new focus on a more interventionist industrial strategy.

The UK Government has recently published an Industrial Strategy and Clean Growth Strategy.

The Energy Minister said that the new energy trilemma is Productivity, Security, Affordability.

We have pledged to phase out coal, and have ambitious and legally binding carbon reduction targets.

The decision to proceed with Hinkley Point C (HPC) was taken within this context.

For the South West region and beyond (where £2.4 billion has already been invested by EDF Energy in preparation for the build) construction and operation will deliver jobs, reboot the supply chain and increase the state of readiness for further investment in infrastructure.

The plant will operate for more than 60 years, saving nine million tons of CO2 every year, generating clean reliable power, with a capacity factor of more than 90 per cent.

But, already, it looks like an antique. Will it be possible to standardise and duplicate the design, making it scalable to solve our national energy security needs (beyond the 7 per cent it will alone deliver), let alone contribute towards the global challenges of clean energy access within urgent timescales?

HPC is a high cost outlier compared to new build elsewhere, and a world apart from South Korea or China. However, wherever you build, the cost of the nuclear island remains fairly consistent. The major cost increases in western countries is in the balance of plant and indirect costs.

We have heard that the market context is driving the cost more than the complexity of the EPR reactor design. What drives cost in nuclear new build is a question that my organisation is deeply involved in.

The reason for this is that  nuclear to make a meaningful contribution to solving climate change, two major barriers need to be addressed: high costs and low public confidence. In fact, they are linked. Let’s focus on cost.

The UK offshore wind industry recently smashed expectations with astonishingly low prices – £57.50 per MWH for new build starting in 2022/23. Prices have halved in 5years. Other low carbon technologies are playing catch up.

Emma Pinchbeck, director of Renewable UK had the good grace to point out that despite the offshore wind industry now clearly leading the pack on price “We still think nuclear can be part of the mix – but our industry has shown how to drive costs down, and now they need to do the same.”

I couldn’t agree more. Can the nuclear industry step up to drive down costs?

Decarbonisation represents a massive growth opportunity for the electricity sector. If we want to achieve the fastest, most cost-effective and feasible path to decarbonisation then we need a mix of technologies. Solving climate change can be boiled down to a simple strategy: clean up electricity generation and then electrify everything.

Where we cannot electrify – nuclear technology can contribute to the decarbonisation of heat and the manufacture of synthetic fuels for transport.

In decarbonisation, the focus often lands on power production, power only accounts for around 24% of total carbon emissions in the UK. Power generation is a contested space. Nuclear is competing with wind and solar – and with gas.

The rest is transport, heat, buildings, industry and other sectors. Government plans to ban new petrol and diesel cars by 2040 in favour of electric vehicle development will drive more growth in clean electricity generation, and the manufacture of synthetic fuels.

The Energy Technologies Institute (ETI) has modelled scenarios to show how the UK can achieve 2050 carbon reduction targets. ETI’s lowest cost has around 40 GWe of nuclear capacity installed by 2050 as part of a balanced mix of energy technologies. But in order to achieve that, confidence in the ability of the nuclear industry to deliver new nuclear plants is key.

Right now, it’s fair to say that confidence is low. There are three major barriers to overcome. Firstly, financing very large capital projects is expensive. Secondly, conventional nuclear plants are large and complex, bringing very significant construction risks; and thirdly, low confidence that these projects can be delivered on time.

The nuclear industry therefore needs to undertake a radical transformation if it is to rebuild trust and credibility that it can deliver on time and on budget, provide certainty to investors, and confidence to support a political mandate as well as regaining public support.

Cost reduction strategies – as outlined in the new Energy Innovation Reform Project report – that we are interested in testing include:

Learning from the success of the offshore wind industry: collaboration; cost and risk sharing between supply chains and developers will be critical in realising the strategic priorities for the nuclear sector: to tackle construction delay; cost over-runs; slow build rate; and high financing costs.

Given the low labour productivity of western countries, and especially in the construction sector, the future may lie in modular build and shipyard assembly of mass-produced units that can be manufactured and shipped to sites for installation rather than custom-built, thereby speeding up construction times and lowering direct and financing costs.

Technological innovation must be coupled with a laser-like focus on accelerating commercialization of climate solutions, at scale, within mid-century timescales.

See the full programme here or click the image below.