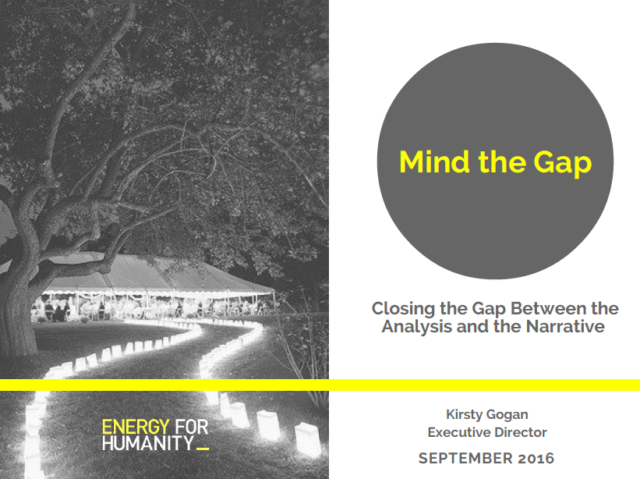 Check out Kirsty’s slide deck from her speech at the Spanish Nuclear Society on 29 September 2016. A summary of the text is below.

Energy for Humanity is founded around two of the great environmental and humanitarian challenges we face in this century: how to dramatically cut carbon emissions to avoid catastrophic climate change within our own lifetimes and that of our children, and secondly, lifting billions of people out of poverty to achieve the quality of life that we in Europe take for granted. Both of these challenges have one thing in common: the energy we use to power the world.

There is now tension in the environmental movement about our pathway to a low-carbon energy future. The tension is around whether we should be guided by ideology or evidence.

There is in fact a gap between what the ideology, or narrative tells us, and what we see in the analysis. The narrative says: we can do this with 100% renewables.

But all the evidence points to a multi-technology strategy to create a stronger chance that we will reduce carbon emissions fast enough to avoid dangerous climate change.

Our goal is to close the gap between ideology and evidence.

Bill and Melinda Gates in their annual letter this year asked us to:

“Just imagine, for a minute, life without energy.”

You don’t have a way to run a laptop, mobile phone, TV, or video games. You don’t have lights, heat, air conditioning, or even the Internet to google the question.

About 1.4 billion people—18 percent of the world’s population—don’t need to imagine. That’s what life is like for them every day – when the sun sets, it is dark.

You can see this fact for yourself in this photograph of Africa at night taken from space.

Now I’d like you to imagine a world in which we have met our climate targets, whilst also ensuring that everyone has good living standards by 2050. Is it possible for all 10 billion people in the world to live safe, secure, peaceful lives, to eat well, travel more and live in more comfortable homes, whilst at the same time reducing emissions within the short time we have left?

Surely, this should be our ambition.

We have a long way to go. Right now: half of the world’s population lacks access to electricity, but quite rightly aspire to energy rich lives not only for household use, but also for modern energy services many of us take for granted – including water sanitation, refrigeration, industry and streetlights.

When we talk about solving climate change, it’s tempting to think that we could reduce our carbon emissions by saving energy.

Energy efficiency should absolutely be a priority. Aggressive and effective energy efficiency programs could significantly reduce electric power and natural gas use and associated GHG emissions, and would deliver other real benefits: cost savings, improved air quality, and greater energy security and independence. However, it would be a mistake to over-estimate the role that energy efficiency can play in meeting our carbon reduction targets. We need zero waste, but also zero carbon. And electricity consumption is forecast not only to grow, but double by mid century, – adding the equivalent of one Brazil each year.

Which is a good thing!! We hope that it will continue to grow. Access to electricity is the bedrock of modern life and improves quality of life for millions. The question is, where should this electricity come from?

Right now – mainly from coal. The International Energy Agency reported this week that there has been “A major shift in investment towards low-carbon sources of power generation”.

This is according to a first-ever detailed analysis of investment across the global energy system.

But this does not tell the whole story.

Since 2011 investment in renewables has flatlined – although the cost has been getting cheaper so we have been getting more capacity for our money.

Nuclear power investment reached its highest level for two decades in 2015, largely due to expansion in China, “where new nuclear capacity is reducing the need for coal-fired generation”. Reducing air pollution is a huge priority in China of course, whilst meeting the demand for reliable power from the growing middle class.

In 2015 new low-carbon generation – renewables and nuclear – did exceed the entire growth in global demand for power in that year.

But the real story is in non-OECD countries, where “investment in conventional generation remains strong” –more than 75 GW of coal-fired power plants started operation in 2015 in “developing Asia” – “as much as all renewable capacity additions in the region combined”. A “shift” may be underway – but it is not going fast enough.

Why does this matter? Well from a climate perspective, electricity generation matters a lot: There are different ways to slice up this pie, but which ever way you cut it:

Burning of coal, natural gas, and oil for electricity and heat is the largest single source of global greenhouse gas emissions. Despite our best efforts, emissions across all sectors have been going up – not coming down.

Avoiding dangerous climate change means getting as close to zero carbon emissions as possible, as fast as possible. How can we get to zero?

Not only this – but how do solve climate change, whilst enabling the growth needed for half the people in the world?

I first began to understand the need for electrification thanks to one of our great climate and energy system experts, the late Professor Sir David MacKay.

First: clean up electricity – by replacing all of the fossil fuel powered electricity generation. We should really aim to do this by around 2030 – very soon!

Then expand that clean electricity generation to electrify heat and transport.

Replace petrol vehicles and natural gas heating and cooling with alternatives that run on electricity, like electric vehicles and heat pumps. Get as much of our energy consumption as possible hooked up to the power grid.

“When you are connected to a grid, everything you use that runs on electricity is, in carbon/climate terms, as clean as that grid.”

So for me – the secret here is not conservation (although we should aim for zero waste) but abundance! The question is: can we replace the entire existing fossil fuel infrastructure, abandon nuclear altogether and meet all the world’s energy needs – using wind and solar alone?

And we’ve barely begun to talk about the additional energy that will be required to electrify the world’s transportation, manufacturing and industry sectors and meet the growing demand for energy-intensive water desalination.

It’s a wonderfully seductive vision that it is within our grasp to inhabit a world in which all of humanity could be supplied with unlimited clean energy from the wind and the sun. A great many environmental activists have devoted their lives to realizing this dream. The trouble is that there’s little evidence to suggest that any of this is possible in the real world.

Let’s look at the data

The world met 13.7% of its energy needs from zero-carbon sources in 2014. Solar and wind, in particular, are growing fast, with output more than doubling in the five years to 2014.

The chart on Slide 12 shows that while renewables have shown commendable progress, their shares are still very small of the total.  The rapid rise of renewables has been overshadowed by huge increases in global energy demand in recent decades, as you can see in this chart. These charts show how far zero carbon energy has come, and how far there is to go if the world is to avoid dangerous warming. The global energy mix is still overwhelmingly based on fossil fuels.

So not only will we need to dramatically reduce carbon emissions, almost to zero, but also accommodate at least a doubling in global demand for electricity in just 35 years. Attempting to do this with 100% renewables significantly increases the risk that our efforts to tackle climate change will fail, causing severe harm to the environment and to young people

Working with climate scientists last year, one very clear idea was repeated again and again. The climate does not care where electricity comes from, only how much carbon dioxide in the atmosphere. The chart on Slide 13 tells us the carbon footprint of different energy sources and it’s very clear then where our focus should be. As climate scientists around the world are increasingly saying: Given the scale and urgency of the challenge before us: Nothing should be off the table.

All zero carbon electricity sources will have to play a big role to reverse the current picture: from 85% fossil to 85% clean. And we know that a multi-technology strategy is more likely to succeed.

We’ve talked about technologies, and the scale of the challenge in terms of how much power we need to replace, and generate. We haven’t talked about time. We do not have the luxury of time here. Scientists tell us we need to have cleaned up our electricity generation by 2030, and got to zero carbon across all of our energy use by mid-century, if we are to avoid the worst impacts of climate change. So how fast is it possible to build out new electricity generation?

Just look at this real world data on Slide 14 showing how fast it is possible to add electrical energy in 15 years. In fact only 6 countries in the world have successfully cleaned up their electricity generation: three of them: Sweden, France, Switzerland through a combination of nuclear and hydro. In a world that is adding the energy equivalent of another Brazil to the planet every year, and where coal remains not only the most widely used source of energy, but also the fastest growing, nuclear energy has the potential to make a significant contribution to the type of clean energy mix that will be required if we are to seriously scale back on our dependence on fossil fuels globally.

Deep decarbonisation for a high energy planet will involve pushing as much energy use as possible to electricity grids.

Wind, solar, hydro, increased use of natural gas in the short term, and perhaps advances in carbon capture and storage technology, and nuclear energy are all components of an overall transition to clean energy.

Having more options rather than fewer is likely to make solving the climate problem easier, less expensive, more feasible, faster, and make the transition to lower carbon economy less risky even if individual options fail.

Thank you for your attention. 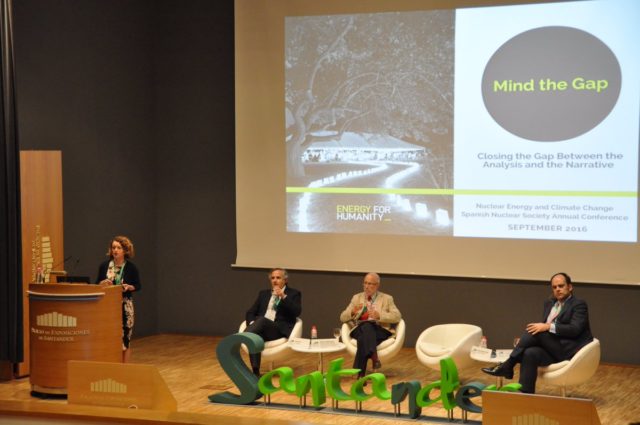