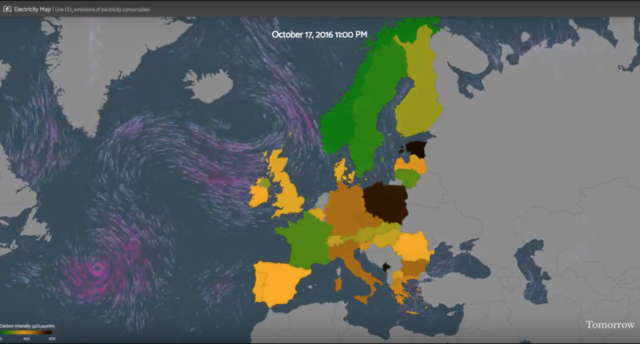 What better way to review 2017 than a two-minute time-lapse video of carbon intensity?

Energy for Humanity collaborated with ElectricityMap creators, Tomorrow, to track climate leadership in Europe and publish our European Climate Leadership Report at the COP23 Climate Conference in Bonn. We love their Electricitymap Pro Version as a tool to better understand the different carbon intensities of the electricity generation systems of European countries, and the impact of of cross border electricity flows.

Watch this custom-made timelapse video above showing the electricitymap for the period of October 2016 to September 2017. In high speed it reveals interesting details on European climate performance:

Will 2018 be the year that we get serious about tackling climate change?

From a climate perspective, 2017 has been a carbon intense year. In November we learned that global carbon emissions are on the rise again in 2017 after three years of little-to-no growth, according to researchers at the University of East Anglia and the Global Carbon Project.

Something needs to change. Our European Climate Leadership Report shows that away from the political hot air, those countries with the cheapest and cleanest electricity grids use a combination of nuclear, hydro and wind.

However, few European leaders have had the courage to take climate seriously enough to say that nuclear is needed as well as renewables.

At the end of 2017, President Macron broke the taboo about nuclear as a climate solution. Speaking at the One Planet Summit in December he said:

“I don’t idolize nuclear energy at all. But I think you have to pick your battle. My priority in France, Europe and internationally is CO2 emissions and (global) warming”

President Macron announced that he would not follow Germany’s example by phasing out nuclear energy in France because his priority was to cut carbon emissions and shut down polluting coal-fired production.

Bravo! Our open letter to him in July, signed by 45 eminent environmentalists and scientists, expressed alarm at his now-thankfully-reversed decision to move France away from clean nuclear power. Few nations have done more than France to demonstrate the humanitarian and environmental benefits of creating a high-energy, nuclear-powered, electrified society.

By choosing the new battle against climate change over the old battle against nuclear, President Macron has shown real climate leadership. It took courage to break the nuclear taboo. Why does it matter? Because to solve climate we need more climate realism.

We wish all our followers and friends Happy Holidays and all the best for the new year.

Your Energy for Humanity Team