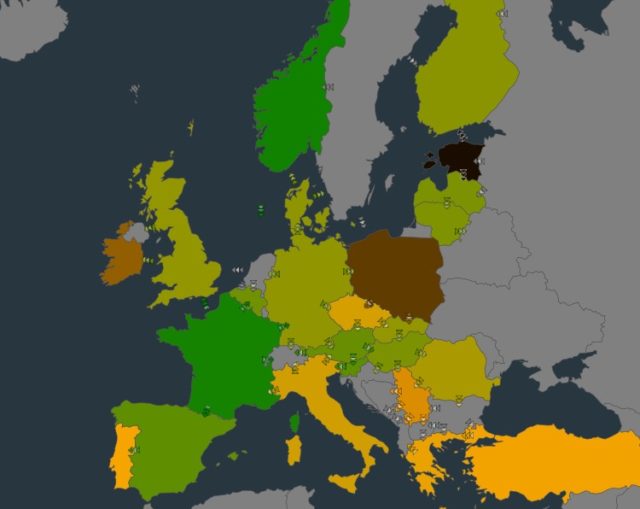 Energy for Humanity is delighted to have been invited to give a keynote address at the European Nuclear Energy Forum (ENEF) in Prague.

Executive Director, Kirsty Gogan has been asked to open the Plenary by speaking about the role of nuclear and climate in Europe.

A picture speaks a thousand words. As you can see from the superb world electricity map (showing live CO2 emissions of electricity consumption) many countries in Europe are already going green largely thanks to a combination of hydro, nuclear, solar and wind.

To solve climate change, many experts believe the best strategy is to firstly clean up electricity generation, and then expand clean power generation to electrify heat and transport. Therefore, the first goal on the path to saving the world from climate catastrophe is to reduce the carbon intensity of electricity generation to less than 50gCO2 per kWh. Evidence shows the best way to achieve this, around the clock and in all seasons, is with a combination of nuclear and renewable energy.

Watch the map and see for yourself.

Despite those countries in the lead for hitting the carbon intensity target doing so via this broad mix, bizarrely, the European Commission’s recent package of legislative documents, Clean Energy for All Europeans, makes barely a mention of carbon intensity and no mention at all of nuclear. It includes proposals on renewables, electricity market design, energy efficiency, governance, security of supply, etc. but nothing on the clear fact that nuclear provides not only 27% of all EU electricity but 50% of its low-carbon electricity, making it the largest single clean energy source.

The truth is: the climate doesn’t care how the electricity generated. Renewables are important, and should be supported with policy measures. But increasing share of renewables – or nuclear – is not the goal. Renewable and nuclear energy are a means to an end, not an end in itself.

For the avoidance of doubt: throughout its life cycle – construction, operation, decommissioning – emissions from nuclear are comparable to those of renewable energy sources. Nuclear power emits an average of 15 g CO2/kWh. This is 30 times less than gas, 65 times less than coal, three times less than photovoltaic and about the same level as wind power. (for an impartial review of the life cycle analysis of different energy technologies see this POSTnote on lifecycle analysis of electricity generation).

The ENEF is a unique platform for a broad discussion about the opportunities and risks of nuclear energy. These discussions are linked to the energy challenges faced by the EU and its Member States and in particular to the role of nuclear energy within the strategic framework for the Energy Union.

Founded in 2007, ENEF gathers all relevant stakeholders in the nuclear field: governments of the 28 EU Member States, European institutions including the European Parliament and the European Economic and Social Committee, representatives of the nuclear industry and regulators, electricity consumers, and civil society.

More information is available here along with the full programme.

We need more balanced representation in the conversation about the role of nuclear in tackling carbon emission in Europe. If you can make it to Prague in May, please register to attend here.