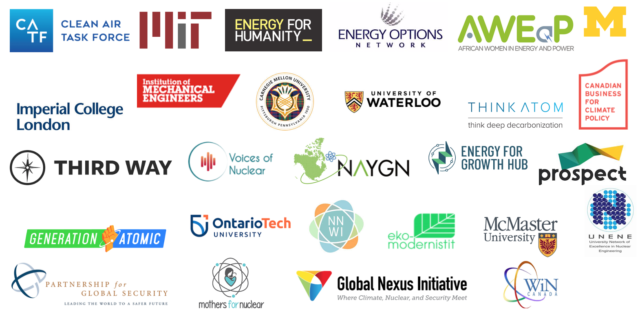 Civil Society Declaration Calls for a

The signing in London yesterday of the Canada-UK Nuclear Cooperation Action Plan is a welcome demonstration of determination to do more and to go faster in realising the clean energy system we need.

We applaud the commitment and vision shown by UK and Canadian Governments, but note that at their current scale, the Canadian and British programmes will only play a small, albeit meaningful, role towards the reinvention of global energy supply demanded by the climate crisis.

The collaborative spirit admirably demonstrated by Canada and the UK is a great start. We can now build on it with a new commitment to rapidly commercialise these valuable technologies.

The scale of our ambition must be commensurate to the scale and urgency required by our current predicament. These products must be designed to address the scale of the needed global clean energy transition. All of the modelling shows that we will need these technologies if we are to transform a significant percentage of our total energy consumption, currently dominated by fossil fuels, by mid-century.

The last decade has seen the development of wind and solar into affordable technologies that can make major contributions to the decarbonisation of electricity.

In this critical decade we must expand the suite of clean energy options to include nuclear products that are cost competitive, easier to buy, easier to deliver, present lower risk to investors and can meet a broad range of market applications.

In addition to the supply of electricity, which is only one fifth of energy consumption, advanced reactors have the potential to supply heat to homes, businesses and industrial processes; to produce hydrogen and synthetic fuels that will support a transition in transport and the difficult sectors of aviation and shipping; to desalinate seawater in regions suffering water scarcity; to support access to modern energy services in remote and developing communities; as well as to repower the existing global fleet of coal plants as part of a just transition.

We recognise that forthcoming small modular reactor technologies can enable sustainable development and deep decarbonisation simultaneously. We applaud yesterday’s commitment by the UK and Canada to realise SMR potential, and we call on all capable countries to collaborate to accelerate the development and commercialisation of advanced reactor technology during the 2020s for rapid global deployment at scale.

Kristin Zaitz and Heather Matteson Mothers for Nuclear (US)