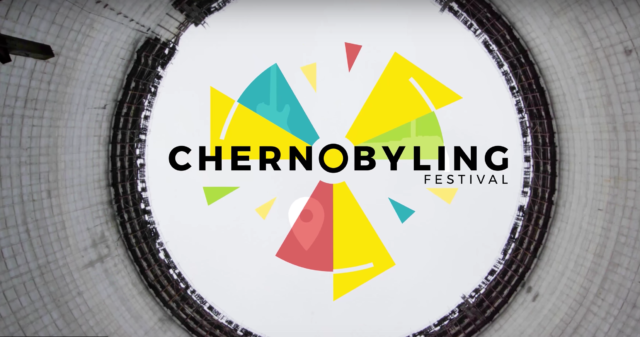 Artists and urban explorers are reclaiming #Chernobyl to create a “Radioactive Festival” with music, art, photography, urban exploring, workshops and lectures. All profit is dedicated to the inhabitants of the Chernobyl zone. As our friend and colleague over at Bright New World, Ben Heard said: “my heart just exploded”.

Check out all the details here: https://chernobyling.com/

This ‘Radioactive’ festival joins together the people who love Chernobyl, Pripyat and the Zone itself, they want to explore it further and also get to know the human side of it. As well as 3 days full of adventure, new friendships, fun and relaxation, there is also a strong aspect of altruism: All the profit from the festival is directly dedicated to the inhabitants of the Chernobyl zone – also called the “Chernobyl babushkas” – for their medication, improving their living conditions (most of them live in very basic wooden houses) and the restoration of some items and houses, preserving them for the next generations.

Chernobyl is not only the place of tragedy that changed the world, it is a piece of history, a memorial to heroism and a lesson for mankind and… it helped bring communism to an end. In order to make it complete, a place where people are willing to help each other again, a place of unity and true camaraderie, we need to make it live again!

Watch the video by clicking here or on the image below.

Let’s get an expert perspective on the accident at Chernobyl.

Dr David Robert Grimes is a physicist and cancer researcher at Oxford University. He is a regular Irish Times columnist and blogs at www.davidrobertgrimes.com. Twitter: @drg1985. He was a joint winner of the 2014 John Maddox Prize for Standing up for Science.

“Chernobyl was unequivocally the site of the world’s worst nuclear accident. To many, it is also heralded as proof-positive that nuclear energy was inherently unsafe, a narrative adopted by many anti-nuclear groups. The word Chernobyl became synonymous with death on a massive scale. But perception and reality do not always neatly align; in the wake of the disaster, the UN Scientific Committee on the Effects of Atomic Radiation (UNSCEAR) and others undertook a co-ordinated effort to follow up on health effects. In 2006, after two decades of monitoring they outlined the health effects; of the firefighters exposed to the huge core doses and incredibly toxic smoke, 28 died from acute radiation sickness. A further 15 perished from thyroid cancer. Despite aggressive monitoring for three decades, there has been no significant increase in solid tumours or delayed health effects, even in the hundreds of thousands of minimally protected cleanup workers who helped purge the site after the accident. In the words of the 2008 UNSCEAR report: “There is no scientific evidence of increases in overall cancer incidence or mortality rates or in rates of non-malignant disorders that could be related to radiation exposure.”

“It added: “The incidence of leukaemia in the general population, one of the main concerns owing to the shorter time expected between exposure and its occurrence compared with solid cancers, does not appear to be elevated. Although most highly exposed individuals are at an increased risk of radiation-associated effects, the great majority of the population is not likely to experience serious health consequences as a result of radiation from the Chernobyl accident. Many other health problems have been noted in the populations that are not related to radiation exposure.”

“Of course, the fact that the health impact of Chernobyl is far less than people tend to believe should not detract from the tragedy: at least 43 people died as a direct consequence of the disaster and up to 4,000 others exposed in 1986 might yet exhibit some ill effect. Moreover, the scale of disruption in the wake of the incident was enormous, with around 115,000 people evacuated by the authorities from areas surrounding the reactor in 1986. To this day, a 30km exclusion zone around the reactor has been maintained for precaution, despite the radiation level in this boundary being far below that which would cause damage. Unmolested by human hands, the Chernobyl exclusion zone has become an incredible natural wildlife habit and a growing tourist attraction.”