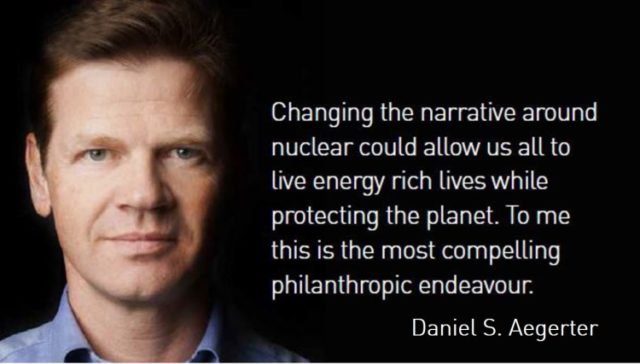 How to power our planet responsibly is a critical question of our time. Let me outline my reasoning for why I am convinced that we need nuclear energy to rise to this challenge.

The first question we have to ask is whether we can reasonably conclude based on all available evidence that we are witnessing manmade climate change? Clearly, the climate scientists have reached an overwhelming and irrefutable conclusion on this issue, even though predicting the pace and magnitude of change remains unclear, as with any prediction about the future. So we have a problem. Given that the most severe scenario results in an extinction event; we have to act – even if there is only a small probability assigned to this scenario – anything else is irresponsible.

Humanity has evolved in its energy sources and fortunately the days of using slaves as the primary means of energy production are firmly behind us. Over the last centuries a clear link has been established between energy availability and quality of life. Fortunately, in Switzerland, we are one of just six countries in the world that already emit the less than 100 grams of CO2 per kilowatt hours of electricity generated. Energy efficiency has a role to play and I fully support market based efforts to improve it. I love my Tesla, and my energy costs are 80% lower than for my previous car. So while we can save lots of electricity, for example by switching to LED’s, we will still need to continue to increase electricity generation in order to electrify transport (and we absolutely should do that). Electricity is the best form of energy. It should become our main source at the expense of fossil fuels, especially coal, which is the most harmful energy source both in terms of carbon and toxic pollution. Our uses for electricity continue to grow. Twenty years ago we didn’t have the internet or electric cars. Already the internet consumes about 8% of our electricity and in twenty years our factories will be even more automated.

In addition, there are still billions of people who deserve a larger energy footprint to buy a washing machine, refrigerator or air conditioner, and feel safer and more secure with services like mains water sanitation and street lighting. We call our organization Energy for Humanity, because I believe that we need to look at this on a global scale. Worldwide electricity consumption is growing by an equivalent to the annual electricity consumption of Brazil each year. This is good news. Access to electricity should continue to grow to enable more people to enter the middle class and lead safer, more secure energy rich lives.

Therefore our biggest priority is finding ways to decarbonise our electricity generation. For this, we need all of the safe, reliable and competitive electricity sources available and we should look to learn from best practices. The only major industrial nation to have successfully decarbonised a fossil-fuel based electric grid is France. In just 11 years, from 1979 to 1990, France went from 20% nuclear to 80% nuclear, whilst their electricity consumption also doubled during this period. Of course, many believe that this transition can be better achieved with highly subsidized renewables that can only produce energy intermittently. This has not yet been proven and Germany’s Energiewende demonstrates that it is not possible for a major industrialised economy to exit nuclear and coal at the same time.

With about €200 billion in paid subsidies and committed liabilities, German carbon output has risen considerably. Coal fired plants continue to supply 45% of German electricity production and 10 GW of new lignite coal plants are being planned and built. This is not about nuclear versus renewables. Coal is our common enemy. Coal is both the largest energy source and the most polluting, yet it remains the fastest growing worldwide. And meeting rising global energy demand is only half the battle. We also need to shut down and replace vast terawatts of existing coal plant capacity around the world. It seems obvious that variable renewables can’t do that alone, within such urgent timescales and at a financeable cost.

These global challenges are already unprecedented in their scale and magnitude. Without nuclear power, it may not possible. Wouldn’t it be irresponsible if we didn’t continue to support the development of new advanced nuclear technologies at least as an insurance policy?

We don’t have to love nuclear energy, but we can accept that it works and could power our planet safely with carbon free electricity. In addition, the innovation potential is enormous in the decades ahead. Today’s nuclear plants extract around 3 per cent of the available energy in uranium. Modern reactor designs will extract more than 85 per cent. As well as being ‘walkaway safe’ cheaper and simpler to manufacture at scale, many of these new reactors will solve the existing waste problem by using it as fuel.

The truth is that successful opposition to nuclear power has led to a coal based energy policy that now threatens the stability of our global climate upon which life depends. In light of this, many leading environmentalists are looking again at nuclear power. I hope you will join this conversation. Please do talk to your friends and colleagues about these issues. Support Energy for Humanity and join forces with us to end the reign of old king coal and create a safer, more secure world, less vulnerable to impacts of catastrophic climate change.